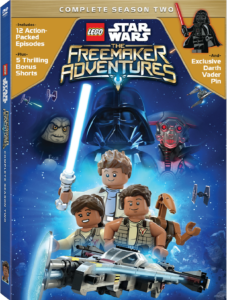 My son, Jacob, age 6, just loves Star Wars The Freemaker Adventures. The second season was released on DVD on March 13, and Jacob hasn’t stopped watching it yet. The adventures are great, and he really enjoys watching it on the weekends, and after school.

The second season of “LEGO Star Wars: The Freemaker Adventures” delivers all 12 action-packed episodes plus five bonus shorts on DVD! The Emmy®-nominated animated television series is set between Stars Wars: The Empire Strikes Back and Star Wars: Return of the Jedi and focuses on the three Freemaker siblings as they explore new worlds, meet new characters and Star Wars icons, and have unforgettable adventures. The second and final season follows Rowan, Kordi and Zander as they are thrown into battle after they join up with the Rebels! Bring home the out-of-this-galaxy adventure on DVD on March 13, 2018!

It’s a 2 Disc DVD with a total of 12 episodes, which include the following titles: