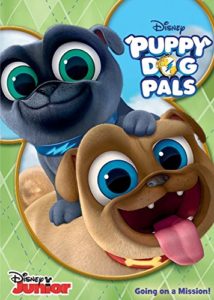 My 6 year old loves Puppy Dog Pals.  Jacob loves how much fun Rolly and Bingo have.  He can’t get enough of this cartoon.  He used to watch other shows, but now he is addicted to this DVD.  I don’t mind, because it is super cute, and I enjoy watching it too.

They’re cute, cuddly and all collared up for pup-tacular adventures!  While their owner Bob is away, adorable puppy brothers Bingo and Rolly embark on exciting missions stretching from their own backyard to amazing locations all around the world!  With support from their “big sister” Hissy, a neighborhood full of animal friends and Bob’s high-tech inventions, these hilarious heroes are always ready to unleash totally paw-some fun!

Voices include that of:   Issac Ryan Brown as Bingo; Sam Lavagnino as Rolly; Harland Williams as Bob; Jessica DiCicco as Hissy; and Tom Kenny as A.R.F.

This, Season 1, Puppy Dog Pals is available on DVD on Tuesday, April 10, 2018.  You can order it now, over on Amazon.  I’m sure your little one would love it.  Jacob is almost 7, and he adores watching the antics of Bingo And Rolly.

Puppy Dog Pals has become a big part of Jacob’s life, and now I’m ordering the toys, for his birthday.  He will be so excited when he sees his Rolly and Bingo Stuffed dogs.  I can’t wait!

Fun fact, Bingo and Rolly are based on real dogs!  (found on facebook page)