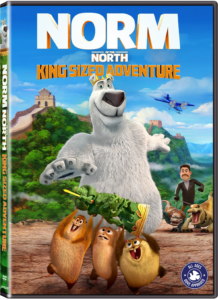 While Norm and his friends are preparing to celebrate his grandfather’s wedding, trouble is stirring in Misty Mountain. There, Norm meets an archaeologist named Jin and learns that a priceless Chinese artifact has been stolen by Dexter, Jin’s old partner. With the help of his lemming friends, Norm must embark on a journey across the world to help recover the artifact and return it to its rightful place. Can Norm keep his word to his new friend Jin and return home in time for his grandfather’s wedding? Only time will tell.

This King Sized Adventure truly is a great movie, that will keep your kids entertained on their Summer Break for 90 minutes.  Jacob watched it 3 times already, and keeps coming back for more.  Every time he wakes up, he asks to watch it, before he does anything else.  And, to be honest, I’m into it too.