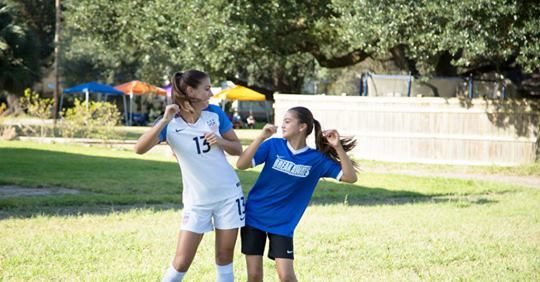 Alex & Me is a great film.  It showed my 7 year old he could overcome a lot.  He really enjoyed watching it, as did my daughter.  This film is so fascinating.  We loved watching it, as a family.  Even the man of the house got into watching it.

Teenager Reagan Willis has one dream – to play soccer like her hero, Alex Morgan.  Her bedroom is a shrine to all things Alex, including a life-size poster of the Olympic gold medalist.  Yet in the Willis house, Reagan lives in the shadow of her prep football superstar brother, Logan.  When Reagan fails to make the cut of the premiere local soccer club team and is humiliated by her rival Claire, she’s certain her ship has sailed.  But after accidentally hitting her head, Reagan’s poster of Alex Morgan suddenly comes to life and everything changes.

You will be touched by this film, and your child will realize that dreams can come true.

I’ll be giving a copy away, soon!

Warner Bros. Home Entertainment provided me with a free copy of the DVD I reviewed in this Blog Post.  The opinions I share are my own.