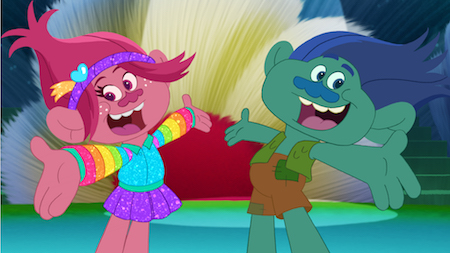 DreamWorks Trolls: The Beat Goes On! Season Five is now available on Netflix. Your favorite singing trolls are back for more musical adventures and we have five fun clips to share with you!

Executive produced by Matthew Beans, the wonderful cast of Trolls: The Beat Goes On! includes the voice of Skylar Astin (Pitch Perfect, Wreck-It Ralph) as Branch and Amanda Leighton (“This Is Us”, “The Fosters”) as Poppy. This season Queen Poppy decides to create a new Bergen-free Troll anthem, Branch must overcome his fear of birds, Guy Diamond loses his glitter, and all of Troll Village comes together to celebrate the one day it snows with an epic Snow Day. Also, who is Mr. Glittercakes?! Join in on exciting new adventures as the adorable, happy Trolls party like never before in all new-episodes available exclusively on Netflix January 18. About DreamWorks Animation Television: