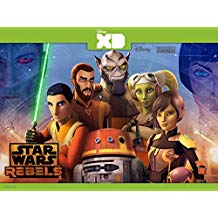 I have already watched Star Wars Rebels Season 4.  And, all of the bonus footage.  Digital download is available now, Blu Ray will be available next Tuesday!

My 7 Year Old is watching it, again, as I write this.  He is thrilled with Season 4.  Usually he’s on his iPad, or Xbox, but now he’s actually taking a break, to watch this great cartoon series.  You need to check out the Bonus extras.  They are so fun to watch.

My 21 year old, daughter, is actually watching with my 7 year old, son.  They love Star Wars, so when this video was available, we snatched it up.  There’s so much Bonus Footage on this Blu Ray, I can’t get over all of it.  It’s so cool to watch the bonus stuff, on a blu ray, from a cartoon.

As paths come together, we explore the journey of the Ghost crew with some of the talented people who brought them to life.

Executive Producer Dave Filoni shares insights into the Force and its importance across the Star Wars saga.

Go behind the scenes with composer Kevin Kiner to discover what inspired some of the most iconic music in the series.

Go behind the scenes with the cast and crew in 8 entertaining and information-packed episode recaps!