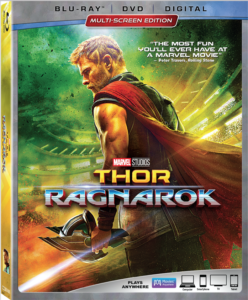 My daughter, age 20, loved watching Thor:  Ragnarok.  She said it was thrilling.  My 6 year old, son, said it was great, too.  There’s a lot of great scenes, and if you order the Blu Ray, it comes with deleted scenes, and more.

Chris Hemsworth’s part, as Thor, is amazing.  He’s such a great actor.  You also have actors/actresses Jeff Goldblum, Anthony Hopkins, Cate Blanchett, and Tessa Thompson all in the film.

In Marvel Studios’ THOR: RAGNAROK, Thor is imprisoned on the other side of the universe without his mighty hammer and finds himself in a race against time to get back to Asgard to stop Ragnarok — the destruction of his home world and the end of Asgardian civilization at the hands of an all-powerful new threat, the ruthless Hela. But first he must survive a deadly gladiatorial contest that pits him against his former ally and fellow Avenger — the Incredible Hulk!

Besides the Deleted Scenes, you have a Gag Reel, Getting in touch with your inner Thor, Unstoppable Women, Finding Korg, and an Exclusive Short.  There’s much much more to see as well.

This is a truly magnificent film.  I loved every second of it.  So did my husband.

One thought on “Thor: Ragnarok was Thrilling!”