Welcome to this Nancy Drew Giveaway.

Remember to enter on the form below.

Hosted By:  This Frugal Family

Prize:  (1) DVD, Blu-Ray and Digital Copy of Nancy Drew And The Hidden Staircase Alex & Me is a great film.  It showed my 7 year old he could overcome a lot.  He really enjoyed watching it, as did my daughter.  This film is so fascinating.  We loved watching it, as a family.  Even the man of the house got into watching it. Teenager Reagan Willis has one dream – to play soccer like her hero, Alex Morgan.  Her bedroom is a shrine to all things Alex, including a life-size poster of the Olympic gold medalist.  Yet in the Willis house, Reagan lives in the shadow of her prep football superstar brother, Logan.  When Reagan fails to make the cut of the premiere local soccer club team and is humiliated by her rival Claire, she’s certain her ship has sailed.  But after accidentally hitting her head, Reagan’s poster of Alex Morgan suddenly comes to life and everything changes.

You will be touched by this film, and your child will realize that dreams can come true.

I’ll be giving a copy away, soon!

Warner Bros. Home Entertainment provided me with a free copy of the DVD I reviewed in this Blog Post.  The opinions I share are my own. “Warner Bros. Home Entertainment provided me with free copies of the DVD I am giving away in this giveaway post.” 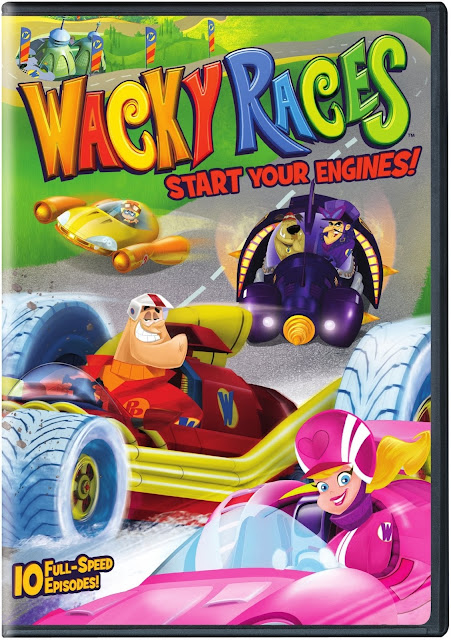 Races: Start Up Your Engines Season One Volume One DVD Giveaway”.

Rev up your engines and get ready for a thrilling ride! Warner Bros. Home Entertainment’s (WBHE) release of Wacky Races: Start Your Engines Season 1 Volume 1 is speeding its way onto DVD April 24, 2018. From Warner Bros. Animation, the legendary Hanna-Barbra animated series is back and better than ever, in an all-new, re-imagined edition the whole family can enjoy together. Everyone’s favorite wacky racers from the original series are back and they’re hitting the road with a brand-new set of vehicles, colorful characters and adventures that will appeal to all ages. Wacky Races: Start Your Engines Season 1 Volume 1 will feature 10 exciting episodes. The DVD will retail for $14.97 SRP. All episodes featured on Wacky Races: Start Your Engines Season 1 Volume 1 are also available to own on Digital HD via purchase from digital retailers.

Inspired by the classic series, these 10 adventures are jam-packed with fast, furious fun! Featuring a talented voice cast that includes Diedrich Bader, Nicole Parker, Peter Woodward, Billy West and Tom Kenny, your favorite racers like Penelope Pitstop, Peter Perfect, the diabolical Dick Dastardly and his snickering side-kick Mutley are here – alongside new-comers Patty Pending, Princess Mimi and Captain Crankshaft and his Skeleton Crew. Race around the world with this wacky bunch, where the laps and the laughs don’t end ‘til the finish line!

“The original Wacky Races was loved by audiences for its colorful characters, outlandish race cars and vibrant animation. We are excited to release this contemporary version of the classic series to a brand-new generation of viewers,” said Mary Ellen Thomas, Vice President Family & Animation Marketing. She added, “We think parents who grew up with this classic will be delighted to share this fresh, fun and new take with their children.”

or any other Social Media Networking Site. This giveaway is valid in the Continental

United States only and entrants must be 18+ years of age to enter. This giveaway will

Warner Bros. Home Entertainment will be solely responsible for the awarding and shipping of the prizes directly to the winners. If you have any issues with with this giveaway please email Holiday Contest and Sweeps at holidaycontestandsweeps@gmail.com